In his opening talk, Leinonen presented the wish to serve the others as a central motivation for his research work and stated learning to be one of the central human rights.

He showed a timeline of the main paradigms of using computers in learning starting from programming/drill and practice to current use of social software and free and open content. The backbone of Leinonen's thesis is based on his responsible role in four web-based learning environment projects including Fle3, MobilED, LeMill and Wikiversity. He summarized the key findings as follows: (1) Design research relying on practice should follow a certain research-based design process, (2) Designers should aim and accept that design is often based on informed guessing, and (3) Designers should be aware of the need to move between different knowledge interests.

A particularly interesting conceptual link made by Teemu Leinonen was a combination of the philosophy of three worlds of knowledge by Karl Popper and Jürgen Habermas' three knowledge interests (prediction, understanding, emansipation). He associated the four steps of research-based design process (1. contextual inquiry, 2. participatory design, 3. product design, and 4. software prototype as hypothesis) with the segments of a matrix in which Popper's three worlds are the columns and Habermas' knowledge interests the columns.

In his questions, Prof. Fischer asked about the concept of learning and the relationship between formal and informal learning. As it has became obvious that we are surrounded by cognitive tools that help us in calculation, remembering, etc., Fischer also wanted to hear what can be condidered as the basic skills of the 21st century to be taught at school. Leinonen's answer included skills in knowledge building, learning to learn, analytical and critical thinking skills used in a community.

An interesting discussion was elicited from a question in which the opponent asked to consider a discussion with Helsinki school board. In this scenario, they would like to know whether the pupils would be given the right to use hand-held calculators (or other tools such as spelling correctors) and to which extent. Another theme of intensive discussion was related to the relationship between the concepts of usability and usefulness of tools. It seemed finally that the discussants agreed on the basic points even though they initially approached them from different angles. As a member of the Computer Human Interaction Academy, Prof. Fischer had a clear view on the field of usability. 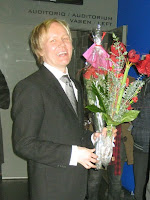 Teemu Leinonen is known for his position as an Advisory Board member of Wikimedia Foundation. Related to this and to the Wikiversity developments, Prof. Fischer asked how does one know if information is reliable in Wikipedia. Leinonen responded that people have to be taught media literacy, i.e. how to use Wikipedia including the functionalities of editing, viewing the history of edits, and following and participating the discussions related to the edits. He also pointed out that people need to remember to check the quality of the references. Leinonen concluded that crowd sourcing is not an anarchy but there is a clear social structure. Fischer agreed and stated that media literacy and a critical position is always necessary, regardless of whether Wikipedia, Encyclopedia Britannica or a teacher/professor is inconsideration.
Posted by Unknown at 6:21 PM

Thank you for reporting this. May I re-post the full text of this post on my own blog in here: http://flosse.blogging.fi/, naturally with your name (and link) as the author.

That is just fine.