Andrew Ng: The Online Revolution: Education for Everyone 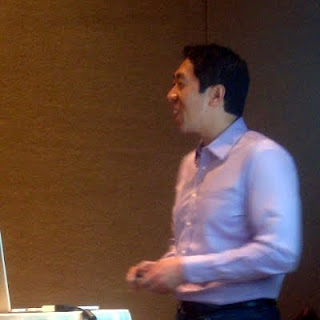 One of the most awaited talks in the NIPS 2012 workshop on "Personalizing education with machine learning" was Andrew Ng's "The Online Revolution: Education For Everyone". Ng is a the director of the Stanford Artificial Intelligence Lab at Stanford University and a co-founder of Coursera, a company that offers for free online courses by top universities online for anyone to take. His research interests include machine learning and neuroscience-informed artificial intelligence. 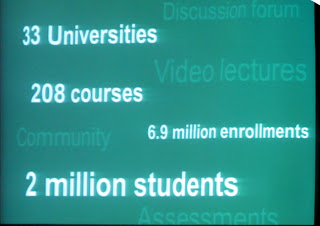 Coursera is an impressive development in providing high-quality education to large numbers of students. Ng used as an example his own course on machine learning that is attended by about 100,000 students instead of 400 in the times of class room education. The courses include lectures divided into about ten minute long videos that include foreign language captioning. Students have a possibility of instant replay which helps considerably following the lectures because different students needs different time. In other words, students can navigate through the lecture materials at one's own order and pace. There are various tools to increase interactivity leading into a surprising conclusion that a web site can be more interactive than a normal class. Namely, if there is one student that answers professor's question well, there may be 39 or 399 others who have already lost track. 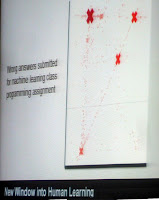 In areas like computer science, mathematics and natural science, autograded homeworks and exercises are used. The Coursera environment also provides a chance to have continuous practice with the material. Ng provided an interesting example related to the autograding of computer programs. In one occasion, about 2,000 students (out of 100,000) submitted the same kind of wrong answer. They were able to provide personalized advice to these 2,000 students in the form of a targeted customized message. There are, however, many areas of study in which autograding is not viable. Ng gave as an example teaching a poetry class. In such areas, peer grading and even self grading can be useful. Coursera has 50,000 student classes with crowd sourced peer grading. Not anyone is given the same rights for grading but there is process through which students gain proficiency in grading.

Coursera helps in building a global community around each course. Ng used as an example a course on sociology. The median response time on students' questions was found to be 22 minutes. This much better than in a normal class if a student sends by e-mail a question to the lecturer, course assistants, or other participants. Moreover, these kind of courses provide an exciting opportunity to conduct educational research. Rather than having two groups of students, 20 persons each, one may have 20,000 plus 20,0000 students. Ng also mentioned that one can identify the forum discussion threads which are most likely to lead to positive learning outcomes. He noticed once that in his own lecture something had not been explained in sufficient detail. He could see that one of the students had provided an additional explanation that could then be referred to when some other students encountered problems of that particular kind.

Andrew Ng referred to Benjamin Bloom's 2 Sigma Problem. In mid 1980s, Bloom had found that an average student tutored one-to-one using mastery learning techniques performed two standard deviations better when compared with conventional instructional methods. In this sense, Ng acknowledged the strength of mastery learning and even more individual tutoring. As a society, we were not able to give everyone an individual tutor, and therefore he emphasized the need to provide tools that have similar qualities to the extent possible.

Regarding the role of face-to-face situation in a class room, Ng cited Plutarch's statement that "the mind is not a vessel that needs filling, but wood that needs igniting." Therefore, providing teaching materials for free in the net does not downplay the value of being a student in a high-quality university with the stimulating environment of professors and peers. One-to-one access to the professors and peers is thus an important motivation to go to universities in the future, too.

Ng described his own way of lecturing that has considerably evolved thanks to the tools available. The students watch the lectures beforehand at home. The class room working can then focus on problem solving in small groups. He coined this mode of working as just-in-time teaching. In other words, the teacher can use the time to interact with the students in the classroom rather than lecturing and students remaining passive for the most of the time. Ng considered that he is serving my students best this way and remains well motivated himself even if giving the course for the tenth time. The materials in the web can also be used in any university in the world where a local instructor can concentrate on one-to-one mentoring, without the need to invest a lot in providing the basic educational materials including lectures and slides.

Andrew Ng emphasized the importance of universal access to education and stated that high quality education is a fundamental human right. I had a chance to discuss with Ng shortly after the presentation, and brought up, among other things, the fact that this very same attitude has lead Finland to have one of the best performing educational systems in the world. In his presentation, Ng also emphasized that it is important that the courses are available for free. In order to have good coverage, one cannot assume that all the students would have chance to pay even a modest fee, and they may not possess a credit card. A statement with high moral value was also that education is about helping students to succeed. Therefore, each student should have given the chance to learn - not to categorize them to an A, B or C student. The time needed to learn can be variable but when good web-based materials and tools are available, this variation is not a problem anymore.

In general, the future of education may be seen to be brighter than ever. There is less and less need to organize education in a rigid, top-down manner. In some sense, much of education has been traditionally organized in an analogical way as planned or command economy. It has also suffered from similar problems of inefficient resource distribution and suppression of democracy and self-management. At worst cases, teachers and professors have used their work in order to boost their egos rather than serving the pupils and students in their need and right to learn. It may be viable to say, though, that children need to guided in what they learn. At university level, at latest, the situation should be driven by the motivation and spirit of the people. In long term, I foresee that there is no need to organize university-based education so that it provides a small number of degrees. From the point of view of modern knowledge management, human knowledge and skills can be described and appreciated in much more fine-grained, or, in machine learning terms, high-dimensional manner.

Hello Sir...
Thank You Very Much For The Post.It Is
Very Important Article For All Students.Thank You. Credit Card Education

There is no doubt that online education has changed the world and we seen this in a very few years.
AboutOnlineDegrees.rg

Excellent article, though I'm not sure how rapidly machine learning/AI will be integrated into education. Cultural norms and entrenched ideas represent huge barriers to progress in this area.

Online Education is such a nice way for the students to learn at home.it is save the times,thanks you sharing such nice information.

Excellent information with unique content and it is very useful to know about the information based on blogs. I went through your blog and it’s totally awesome. Keep on updating your site with such informative post. If possible please include rss feed for your blog. raagtune.com

Thanx for Sharing there is no doubt that online education has changed the world and we seen this in a very few years.Its totally awesome keep it up.Sher-jatt.com