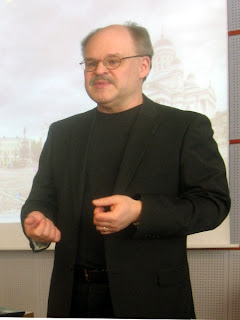 The fourth workshop on Modeling Conceptual Change took place in Hanasaari conference center, Espoo from 20th to 22nd of February, 2013. The purpose of the workshop series is to open up new empirical and methodological avenues for research in conceptual change. Thanks to the funding provided by Finnish Cultural Foundation, a number of high-level scholars working in the area of conceptual change and related areas were invited to give presentations and participate discussions. The workshop series is organized by University of Helsinki in collaboration with representatives from Aalto University and University of Turku. The chair of the series, Ismo Koponen welcomed the participants and the introduced the main objectives of the workshop. 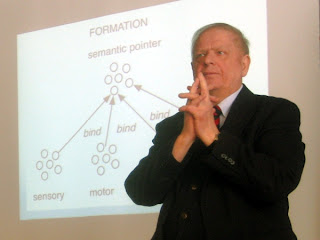 Paul Thagard is the director Computational Epistemology Laboratory at University of Waterloo, Canada, and the author of a number of influential books including Computational Philosophy of Science, Conceptual Revolutions, Hot Thought: Mechanisms and Applications of Emotional Cognition, and The Cognitive Science of Science. Thagard has also lead the development of EMPATHICA, a software program designed to help people understand and resolve conflicts.

In his talk "Concepts, Conceptual Change, and Explanatory Identities", Thagard explained how to use Semantic Pointer Architecture in cognitive modelling. The architecture stems from the research lead by Chris Eliasmith. Semantic pointers are patterns of neural firing that (1) provide shallow semantics through symbol- like relations to the world and other representations, (2) expand to provide deeper semantics with relations to perceptual, motor, and emotional information, (3) support complex syntactic operations, and (4) help to control the flow of information through a cognitive system to accomplish its goals. Thagard stressed the idea that representations are processes, not things, and realized as patterns of firing of neural populations. Mathematically, semantic pointers are vectors that decompressed into other vectors. 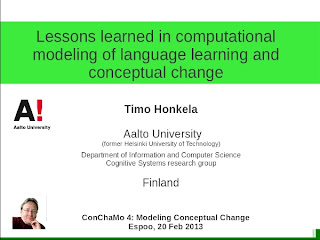 Timo Honkela is the head of the computational cognitive systems research group at Aalto University School of Science, Espoo, Finland. In his talk "Lessons learned in computational modeling of language learning and conceptual change", Honkela took the model presented by Merenluoto and Lehtinen in their paper "Number concept and conceptual change" as a starting point. He found a list of key concepts including concept, perception, understanding, conflict, and change and continued by presenting different theoretical frameworks and computational means to analyze and model these concepts. Honkela considered the question what is the relation between concepts and language. According to Language of Thought Hypothesis, thought and thinking are done in a mental language, i.e., in a symbolic system physically realized in the brain. Honkela promoted a view that has been formulated by Heinz von Foester as "a formalism necessary and sufficient for a theory of communication must not contain primary symbols representing communicabilia (e.g. symbols, words, messages, etc." Honkela concluded his presentation by showing results related to modeling subjectivity of understanding, based, for example, on the use of Grounded Intersubjective Concept Analysis method. 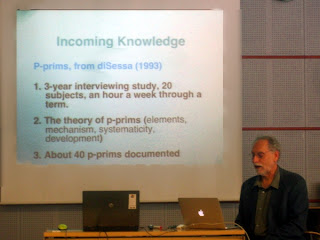 Andrea A. diSessa is a professor in the Graduate School of Education at the University of California, Berkeley, and a member of the US National Academy of Education. He has authored the books Changing Minds: Computers, Learning and Literacy and Turtle Geometry: The Computer as a Medium for Exploring Mathematics with Harold Abelson. As one of the developers, the latter book describes the Logo programming language.

The starting point of Andrea diSessa's talk "Modeling Conceptual Change at the Knowledge Level" was consideration of the strengths and weaknesses of the traditional study of conceptual change. He pointed out that there are almost no examplar of real time analysis in traditional conceptual change research. To provide basis for a detailed analysis of conceptual change, diSessa explained the main elements of his knowledge ontology. These include P-prims, coordination classes, diverse types of mental models, narratives and nominal facts. P-prims are phenomenological primitives that are more or less evident in experience, activited as a unit and serve as a base level of explanation. Recent work in this area includes an article in Cognition and Instruction by Kapon and diSessa in which they explain the real-time processes and individual differences in overcoming misconceptions via instructional analogies. 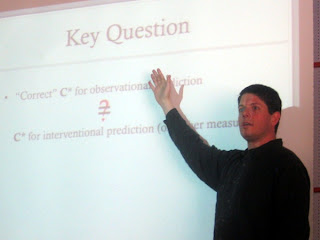 David Danks is an Associate Professor of Philosophy and Psychology at Carnegie Mellon Department of Philosophy. In his talk "Changing Concepts for Causal Coherence", Danks considered carefully two different perspectives - predicting observational versus interventional data, and showed that these can easily lead to different conceptual structures. Expressed in a more formal way, a distinction in model prediction as probability estimation can made between the observational case in which P(X=x | C=c) is estimated and the interventional case in which P(X=x | do(C=c) ) is estimated. He considered the situation in which there is no special epistemological access and therefore concepts must be learned from data. This means that all interventional predictions must allow for uncertainty about the underlying causal structures. He considered this issue in the framework of probabilistic directed acyclic graphical (DAG) models. Danks' striking conclusion was that there is no single "correct" conceptual set. In other words, the "correct" conceptual set for observational prediction is different from the most functional conceptual set for interventional prediction. Ordering of the quality of conceptual schemes is sometimes underdetermined by data, i.e. given the same data set, one can get different orderings dependeing on one's goals. 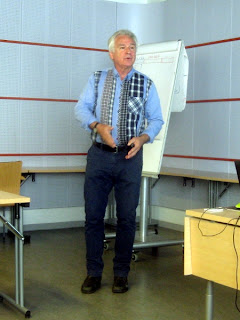 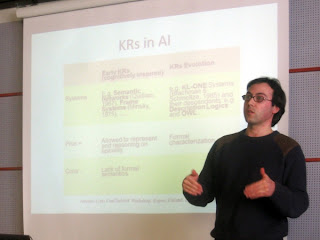 Antonio Lieto is a post-doc research fellow at the Department of Computer Science, University of Turin. In his presentation "Concepts, (Formal) Ontologies and Conceptual Change", Lieto discussed parallel considerations within cognitive science and artificial intelligence related to knowledge representation. He pointed out that within AI, there is a contraposition between two conflicting requirements for the knowledge representation systems, compositionality and representing prototypical information. Lieto described the basics of formal ontology representation and reasoning, and discussed how ontologies could be used as a tool to analyze conceptual change. He also discussed in some detail what are open problems related to formal ontologies. Ontologies are expected to represent common sense concepts and, more in general, non-axiomatic knowledge. However, OWL (Ontology Web Language) does not allow to represent non-classical concepts. Furthermore, common sense reasoning is often non-monotonic. Lieto presented a solution outline based on a hybrid approach in which also protypical information can be dealt with. 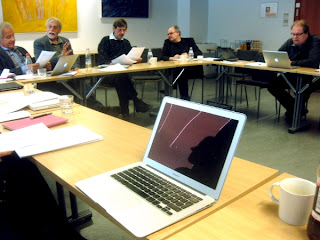 In addition to the talks that lasted for half an hour each, a lot of time was reserved to discussions that also took place in group work format. The research group lead by Ismo Koponen at University of Helsinki had prepared a case study related to physics education. Theme session discussions were chaired by Terhi Mäntylä, Koponen and Honkela. In one theme session, the participants considered in groups how conceptual change can be modeled using Bayesian models (chaired by Danks), P-prims (diSessa), semantic pointers (Thagard) and self-organizing maps (Tiina Lindh-Knuutila). 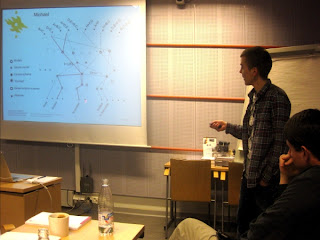 Otto Lappi, Henri Kauhanen and Tommi Kokkonen presented results of analysing a corpus of students' texts. These texts are related to the area of electricity and include terms such as power, current, power, resistance, and voltage. Network analysis and text mining methods had been used to explore students' conceptions. 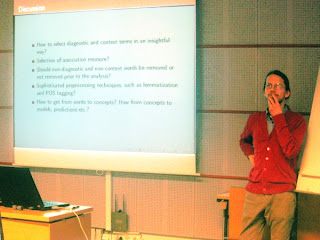 For the text mining a division into diagnostic and context terms had been made. The relationships between the diagnostic terms are reflected by their associations with the context terms.

The workshop took place in Hanasaari Conference Center, suitably situated between the city center of Helsinki and the high-tech area in city of Espoo that hosts, for instance, Aalto University and the headquarters of Nokia (to see further details of the satellite view, see Nokia Maps/Here). 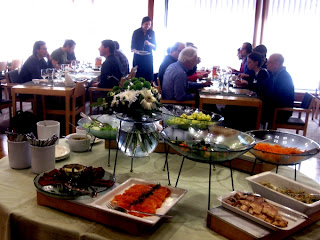 The workshop was attended by a number of researchers in science education, cognitive science, cognitive modeling and philosophy. The participants were from USA, Italy and Nordic countries (Finland, Sweden and Denmark). The intensive three-day workshop provided also many opportunities for informal discussions on conceptual change and related topics. The practical arrangements gave an excellent basis for this for which the local organizers Ismo Koponen and Anna-Mari (Ansku) Rusanen are to be thanked for.
Posted by Unknown at 6:13 PM

The Cognitive System Or Who Draws The Picture In Our Heads

Everyday our mind is bombarded with all kinds information. Very often we fail to cope with all this information

overload and become easy to manipulate. To prevent ourselves from this, we should explore how our cognitive system

works in order to have a more insightful outlook for the processes in our minds.

What exactly is our cognitive system?